Pujya Swami Viditatmananda Saraswatiji has been teaching Vedānta Prasthānatrayī and Prakaraṇagranthas for last 40 years in Ahmedabad, Gujarat and other cities in India, as well as in foreign countries. Having seen almost 3 generations of seekers, Pujya Swamiji has been blessing all the seekers, not only through the discourses on Vedānta, but also through his presence, as Pujya Swamiji is a living inspiration to the young and old generation as well on how to lead a value based life, and being all-inclusive, Pujya Swamiji makes everyone around feel respected, loved and elevated in his presence. 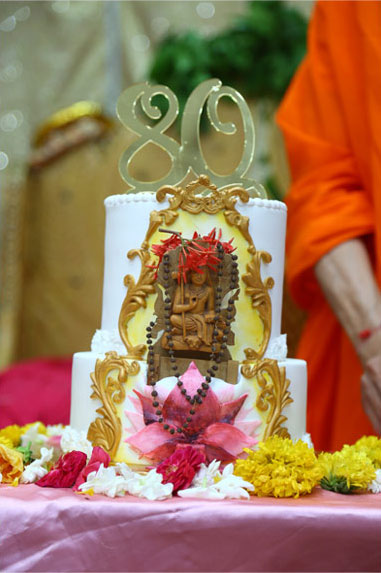 Mahamandaleshwar Param Pujya Swami Kalyananda Bharatiji Maharaj, Bharati Ashram, Ahmedabad, who were invited for this occasion willingly accepted the invitation and blessed Adhyatma Vidya Mandir and Tattvatirtha Ashram with their presence and spiritual discourses during the Shatabhishekam Mahotsava. Adhyatma Vidya Mandir and Tattvatirtha Ashram was enlivened by the enormous participation of seekers from all over India and abroad in these events for the celebration of Pujya Swamiji’s Shatabhishekam. It is no wonder that all the seekers felt blessed to be in Pujya Swamiji’s presence as part of such an auspicious celebration, with discourses and words of wisdom from some of the great Mahatmas. 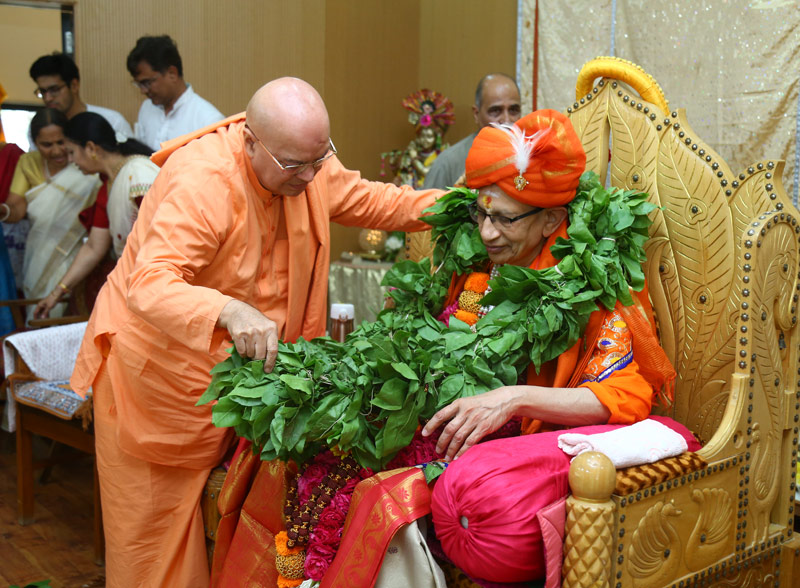 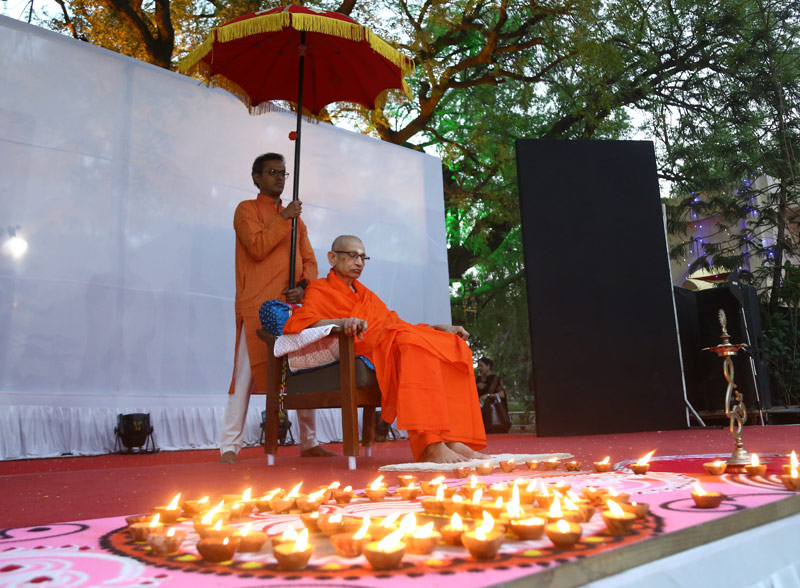 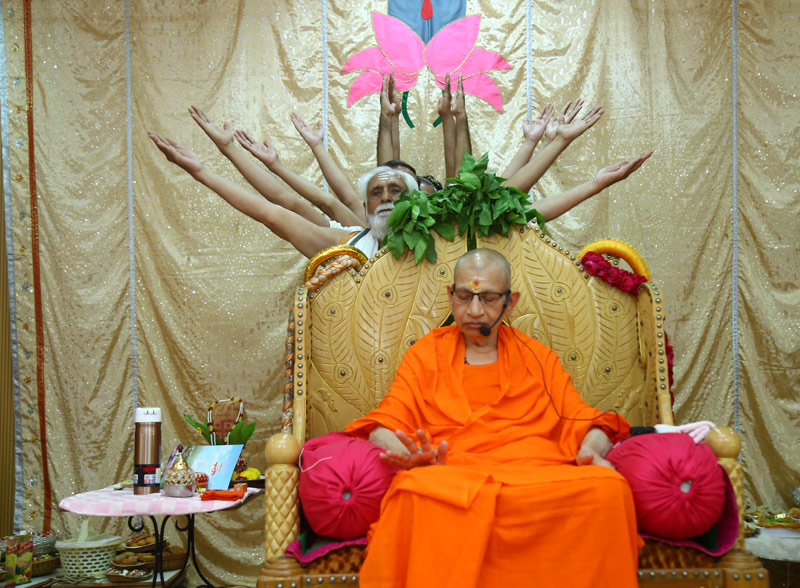 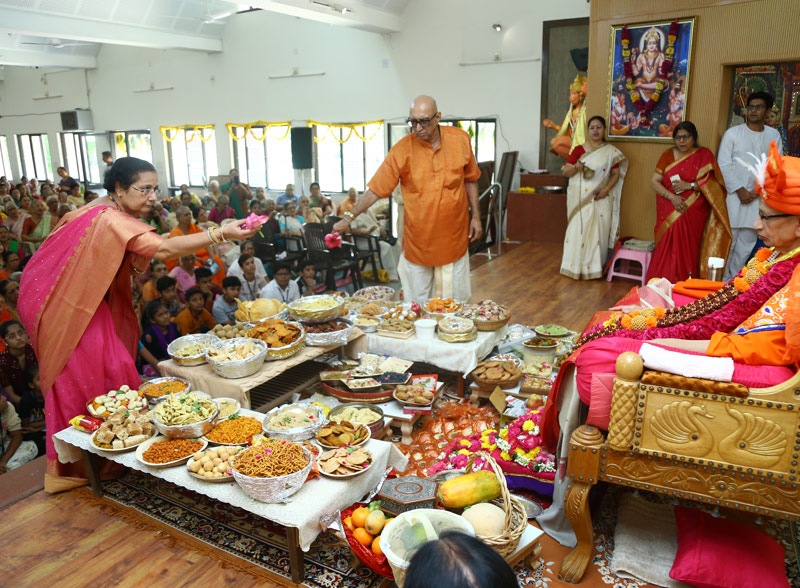 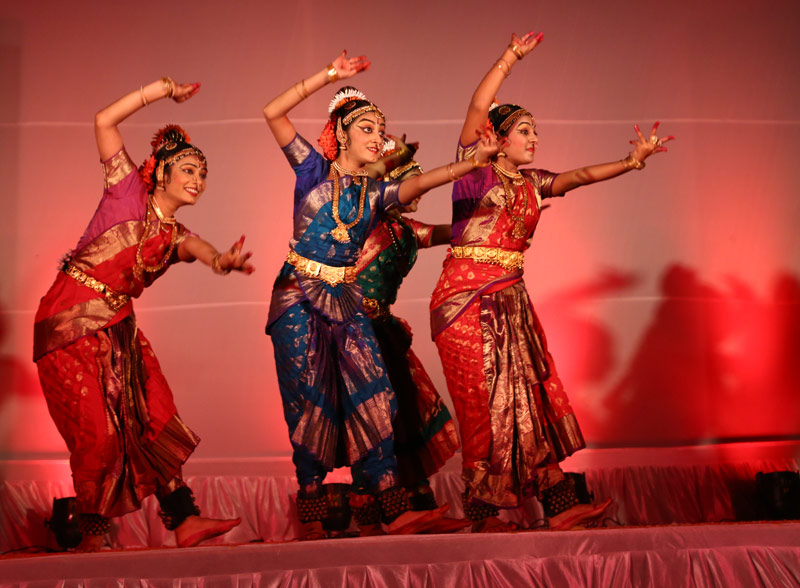 The life of a Mahatma

The life of a Mahatma is a source of inspiration for a seeker in the journey of self-discovery. When the seeker looks at the life of a Mahatma, every bend, every achievement, every struggle in the life of the Mahatma, as though motivates the seeker to grow as a person in his or her own journey of self-knowledge. Pujya Swami Viditatmananda Saraswatiji’s extraordinary journey from being an engineer in US to one of the most highly accomplished and respected spiritual teachers, and indeed a rare Mahatma, is a remarkable one.

Pujya Swami Viditatmanandaji's journey from an Engineer to a Mahatma

Pujya Swami Viditatmanandaji' s extraordinary transformation from a normal worldly person, in this case a mechanical engineer working in New York, to evolve into a Mahatma, took in the space of a few years within a lifetime. Swamiji came to the US for higher studies and obtained MS in Mechanical Engineering from the North Dakota State University. He was working in New York when he attended talks by Pujya Swami Chinmayananda Saraswatiji. He was then a young man of age 37, and was so taken by the vision of Vedānta that against the wishes of his loving family, he gave up his job and enrolled in the 2½ years course conducted by Pujya Swami Dayanandaji in Sandeepany Sadhanalaya in Mumbai in the year 1976. After the course, Pujya Swami Dayananda Saraswatiji asked the then Brahmachari Sri Swaroop Chaintanya to move to Ahmedabad and start teaching to the local people. Pujya Swamiji was a residential Ācārya for the residential course at the Sandeepany Sadhanalaya in Mumbai during the years 1981-1983. In 1983, he obtained Sannyāsa dīkṣā from Pujya Swami Dayananda Saraswatiji and became Swami Viditamananda Saraswatiji. The Advaitik Sampradāya (a spiritual tradition), bestows upon such a ज्ञानी, Mahatma, freedom to choose a life style, a life of solitude or continue to be active in the world. Following the footsteps of his Gurujis’, Pujya Swami Chinmayanandaji and Pujya Swami Dayanandaji, Pujya Swami Viditatmandaji also chose the latter, the lifestyle of a teacher-Sannyāsī, for no other reason but to bless the seekers.

Pujya Swamiji as a Sannyāsī and a teacher

Pujya Swamiji, after being given sannyāsa, has steered his life’s focus into two areas. One, his in-depth study of the shastras, and Sanskrit, enables him to teach the subtle truths of the self knowledge to advanced students, and as many as ten of whom have taken sannyāsa. Pujya Swami Viditatmanandaji is revered as a spiritual leader among thousands of people in communities in Gujarat and elsewhere around the world. He relates well to the life of active people, and hundreds of families including both adults and their children have grown with him. One of Swamiji’s special qualities is how he relates to individuals in a totally non-judgmental and loving manner. With his compassionate nature, ability to listen and accommodate everyone in his life, and capacity to bestow fearlessness to everyone around, Pujya Swamiji truly fulfills all the vows of a Sannyāsī.

He teaches several classes each week to the local community at the Adhyatma Vidya Mandir, Tattvatirtha Ashram in Ahmedabad, accompanied by retreats on Vedānta, and several Jñāna Yajñas on Bhagavad Gītā and Upaniṣads in the surrounding cities. He has undertaken several pilgrimages to the renowned temples all over India alongwith groups of seekers. Pujya Swamiji has also been a residential Ācārya for the residential course at the Sandeepany Sadhanalaya in Mumbai during the years 1981-1983. In the 1990s’ when the Arsha Vidya Gurukulam at Saylorsburg, Pennsylvania was fully functional, Pujya Swami Viditatmandaji became the first Ācārya to assist Pujya Swami Dayanandaji in teaching the US students. It is not at all surprising that Pujya Swami Viditatmanandaji’s teachings struck the seekers by his thorough grasp and clear explanation of the principles of Vedānta.

Pujya Swamiji’s roles as a scholar and as a community leader are reflected in the increasing authorship of his books and publications. To date, Swamiji has authored scores of books in Gujarati and English. Pujya Swamiji’s books invariably reflect his assimilated knowledge and devotion for Lord. The language and style used is not only simple to understand but also inspirational to the seekers. Through these books, Pujya Swamiji invariably puts emphasis to imbibe the teachings of Vedānta to make it meaningful in practical life. His books cover wide range of topics from expounding of the Upaniṣads, Bhagavad Gītā and Prakaraṇagranthas, to those on devotion such as Sūktas, Stotras and Upāsanās, as well as management related topics such as Duty and Success, and others, useful to seekers in all aspects of life. One of his remarkable contributions has been a two-volume set of books called ‘Satsanga with Swami Viditatmanda’, a collection of common questions asked in live question-answer sessions during Satsanga in public gatherings. Pujya Swamiji’s words through Gitadarshan are no less than nectar flowing from Lord Nārāyaṇa himself to address the woes of his Bhakta Arjuna in this modern era. Pujya Swamiji’s assimilated knowledge presented through these books gives the seekers satisfaction equivalent of doing Śravaṇaṁ in his proximity. The profound and methodical teachings presented through these publications are Swamiji’s invaluable contributions to the Ādhyātmika Sāhitya not only for the seekers, but also for the Jijñāsu Ācāryas who find these books as guiding texts for teaching.

Such extraordinary achievements by Pujya Swamiji made him a natural choice by Pujya Swami Dayananda Saraswatiji to be assigned the task to guide the Arsha Vidya Gurukulam in Saylorsburg. 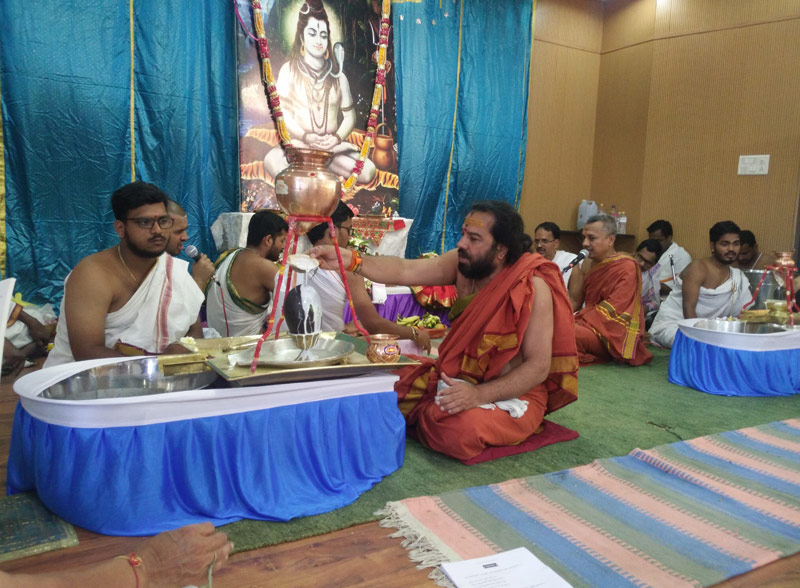 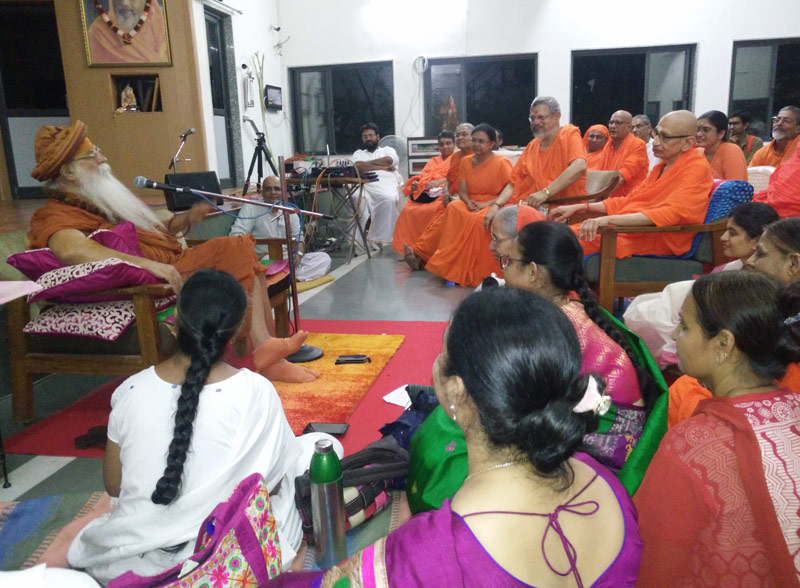 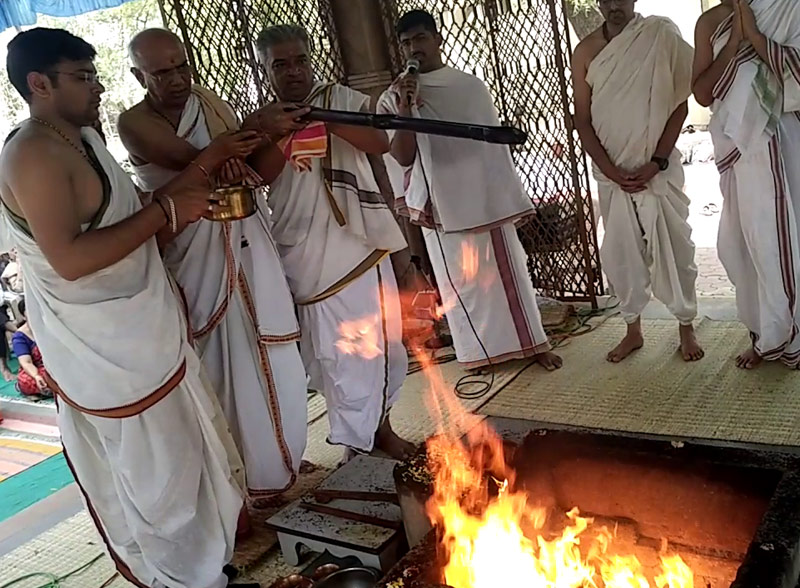 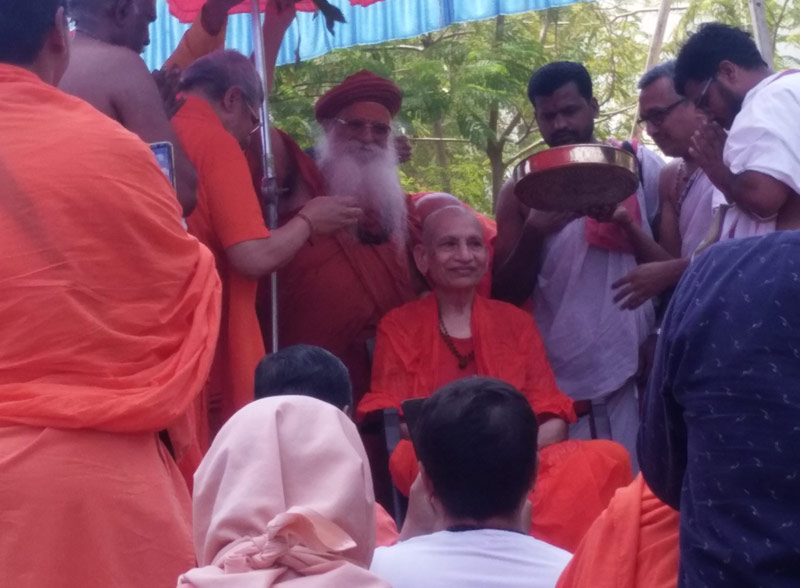 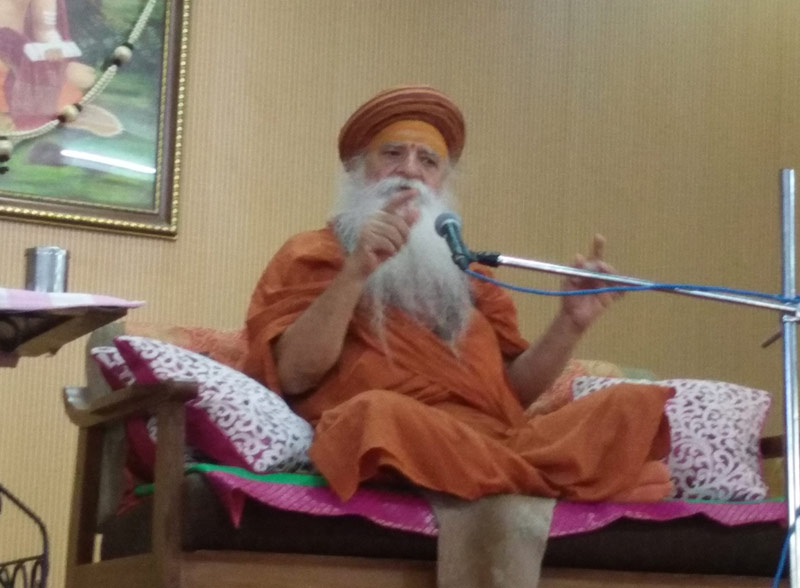 The following publications were released on January 28 th , 2020 as part of the Shatabhishekam Mahotsava, as a special gift to Pujya Swamiji :