Vedānta classes are one of the principle activities of Adhyatma Vidya Mandir conducted by Pujya Swami Viditatmananda Saraswatiji for the last 40 years. Vedānta enables a person to develop a healthy appreciation of the world through a healthy understanding of one’s own experiences and of the nature of the world. Through the teachings on Vedānta, Pujya Swamiji brings to our attention the purpose behind all seeking, which is to be free from bondage, free from limitations. One becomes convinced that freedom from limitations is the goal of human life and knowledge alone is the means to attain this freedom. The knowledge of my true self as limitless is the only solution to all sorrow and unhappiness in life. For this knowledge one must seek shelter of a Guru, and of a Guru alone. A Guru, a teacher, who is not only well-versed with the scriptures, but also belongs to a lineage of Guruparampara, a succession of teachers and thereby can unfold the truth of one’s true nature as limitless. Representing such a Guruparampara, the Śānkara Guruparampara, Pujya Swamiji has been teaching Vedānta for last 40 years in Ahmedabad, Gujarat and other cities in India, as well as in foreign countries, with the sole objective of imparting the knowledge of self which is the only solution to all the sorrow and sense of inadequacy in one’s life.

A range of texts belonging to Vedānta comprised of the Prasthānatrayī: Upaniṣads, Bhagavad Gītā and Brahmasūtra, and Prakaraṇagranthas, as well as Purāṇa are taken up during the Vedānta classes. Pujya Swamiji selects the Vedānta texts to be studied during the Vedānta classes and expounds them with simplicity and in detail. The classes are held on a regular basis in the Ashram, as well as in different locations around the city. These classes are conducted both in English as well as in Gujarati. Pujya Swamiji unfolds each Vedānta text methodically in all of its details along with the Śānkara Bhāṣya and ṭikā. For years together seekers have taken advantage of these Vedānta classes, and the continuous process of śravaṇa, listening and manana, contemplating has enabled these seekers to gain clarity and firm their conviction.

Upadeśasāhasrī is a text written by Bhagavāna Ādi Śaṅkarācāryajī. The text is a composition consisting of a group of 1000 teachings by the teacher. The text is composed of both prose and poetry. There are 671 verses for the poetry, and the 376 verses for the prose. The prose has 3 chapters, while the poetry has 19 chapters. The first chapter in the prose is related to the method of enlightening or instructing a disciple. The prose portion is in the form of a dialogue between the teacher and the disciple. Here the disciple asks questions one by one, and the teacher also asks many questions testing the disciple, and thereby helps clarify many important points. While several commentaries are written on the text, including Ānandagiri ṭikā, the ṭikā by ŚrīRāmatīrtha is more elaborate, and is primarily followed for studying this text.

This text incorporates the teachings of the essence of the subject matter and meaning of all the Upaniṣads. A number of quotes from essentially all the Upaniṣads are included in this text. The text discusses the method of instructing knowledge which is the means of liberation. It also provides a summary of what is taught in all the Upaniṣads and this format makes it conducive for the students to grasp the essence of the Prasthānatrayī. The text is in the form of treatise, written in systematic matter, unfolding the idea from gross to subtler aspects. Ideas are presented methodically in a sequence, so that unfoldment takes place in the mind of the student, and so the teaching immediately sets in, and enables the seeker to gain the knowledge right away. Through the study of this text, the seekers who are desirous of liberation and those who have the implicit faith in the words of the scriptures as well as of the Guru will gain knowledge of the self, and ultimately the goal of life, which is liberation. The study of the text will enable the seekers to get the central idea of all Upaniṣads and the associated bhāṣya. Upadeśasāhasrī classes are conducted in English and are held from Monday to Thursday at the Tattvatirtha Ashram between 7:30 to 8:30am in the morning.

Swami Śankarānanda’s ṭikāon Śrīmad Bhagavadgītā is one of the three most well-known commentaries on Bhagavadgītā, the others being Bhagavān Ādi Śaṅkarācāryajī’s and ŚrīMadhusūdana Saraswatī’s commentaries.Swami Śankarānanda is considered to be one of the great Ācāryas of Vedānta, who is believed to have lived around, 1275 – 1350 AD. He was the Guru of the well-known Swami Vidyāraṇya Muni, who authored some of the great works such as Pancadaśī, Jīvan Mukti Viveka and others.

Many scholars consider Ādi Śaṅkarācāryajī’s commentary on Śrīmad Bhagavadgītā as śravaṇa, ŚrīMadhusūdana Saraswatī’s commentary as manana, and Swami Śankarānanda’s ṭikā as nididhyāsana. This commentary by Swami Śankarānanda is also known as Gītā Tātparya Bodhinī. Pujya Swamiji in this series of Vedāntaclasses expounds the teachings of Śrīmad Bhagavadgītā exposing the seekers to a new viewpoint to allow for a different kind of contemplation. This commentary is said to deliver the essence and purport of Śrīmad Bhagavadgītā as intended by Lord Kṛṣṇa. Knowledge occurs only when the intention and purport is understood and grasped by the listener. And for this the seekers will find this commentary very helpful in getting clarity in their understanding of the text. This commentary is addressed to uttama adhikārī, who already possess the necessary four-fold qualifications of mind to acquire knowledge of the self. Arjuna here is considered to be uttama adhikārī, possessed of viveka, vairāgya and tranquility of mind, and qualified to receive brahma vidyā, knowledge of the oneness between the self and Brahman. This commentary considers imparting Brahma vidyā to be the intent of Bhagavadgītā. Currently, the 5th Chapter of Śrīmad Bhagavadgītā, Śankarānandī ṭīkā,is being taken up. The teachings are in Gujarati, and the classes are held at the Tattvatirtha Ashram every Monday and Thursday evening between 6:30 to 7:30 pm.

Aṣṭāvakragītā is a text taught by Aṣṭāvakra Muni, and hence the suffix gītā, meaningthat which is sung. Aṣṭāvakra Muni was a wise, learned man, abiding in the knowledge of self. On a certain occasion Aṣṭāvakra Muni goes in the assembly of King Janaka’s palace. King Janaka was a jijñāsu, desirous of knowledge of the self, and a highly dispassionate person. Aṣṭāvakra Muni gives teaching on the nature of the self to King Janaka in that assembly. This text is the teaching that Aṣṭāvakra Muni gave to King Janaka in his palace. The teaching is in the form of a dialogue between the Muni and the King and primarily unfolds the pāramārthikatattva, absolute truth. King Janaka was an uttama adhikārī, a seeker of highest competency with regards to preparedness of mind to grasp and assimilate the knowledge. This text is addressed to uttama adhikārī like King Janaka, who already possess the necessary four-fold qualifications of the mind to acquire knowledge of the self. The text does not discuss the means for preparedness of acquiring knowledge such as the various sādhana like bhakti and karma, which are discussed in the Bhagavad Gītā. The emphasis of the text is on knowledge of the self in the form of discrimination of self and non-self. The text is comprised of 20 chapters, of which the 1st chapter is the Muni’s address to King Janaka on the unfoldment of the nature of self based on his assimilated knowledge. Śrī Viśveśavara, a learned person, has provided ṭīkā on this text. Pujya Swamiji expounds the profound teachings in this text and exposes the seeker to various ways for contemplation on the self.

Ātmapurāṇa is a four volume text composed by Swami Śankarānanda. Currently Pujya Swamiji is taking up the second volume of this text. The second volume of Ātmapurāṇa primarily deals with expounding of Bṛhadāraṇyaka Upaniṣad, which is the largest among all the Upaniṣads. In this text Śrī Śankarānanda Swami has expoundedthe main topics of Bṛhadāraṇyaka Upaniṣad in3000 ślokas. The text resolves various doubts with apt arguments. This text is not only helpful to the seekers of AdvaitaVedānta, but also a blessing to the seekers, who may not have yet acquired the four fold qualifications of the mind, as it clarifies each topic in great detail with lot of examples. It is no doubt that seekers will gain further clarity on AdvaitaVedānta by studying this text. Ātmapurāṇaclasses are conducted in Gujarati, and are held at the Tattvatirtha Ashram every Friday and Saturday morning between 7:30 to 8:30 am.

The glory of the Lord, sung and praised by his various devotees in the Bhāgavata are taken up in these classes. Currently, the Stutis of the 10th canto of the Bhāgavata are being studied. Currently the Stutis; praise and glorification by the Gopis are taken up. The love of the Gopis for LordKṛṣṇa is considered to be one of the most supreme. All the time revelling in the līlā, sports of LordKṛṣṇa, the Gopis have completely surrendered themselves to the Lord. Their love for the Lord is pure and free from any barriers, and so they have no fear in expressing their various emotions, and even taunting LordKṛṣṇa. The state of mind when these Gopis having left all their possessions and home, and approached the Lord, are told to return back home, their rejoice during their association with the Lord, the pain of separation they go through when the Lord disappears, and the joy of re-uniting again, all these emotions are beautifully presented in these stutis and expounded with great devotion by Pujya Swamiji. 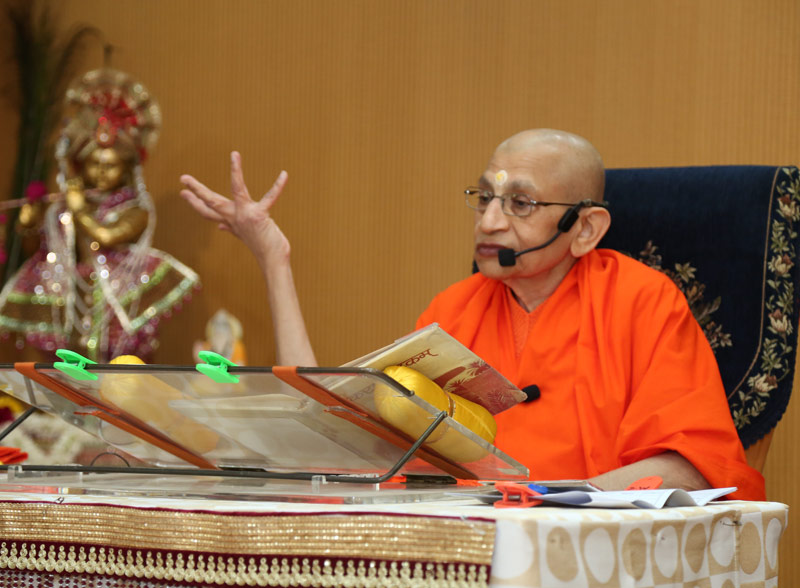 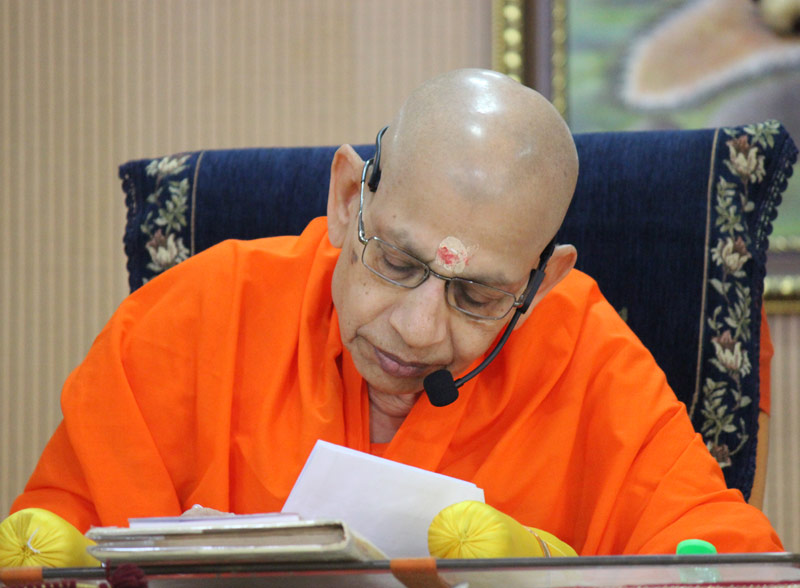 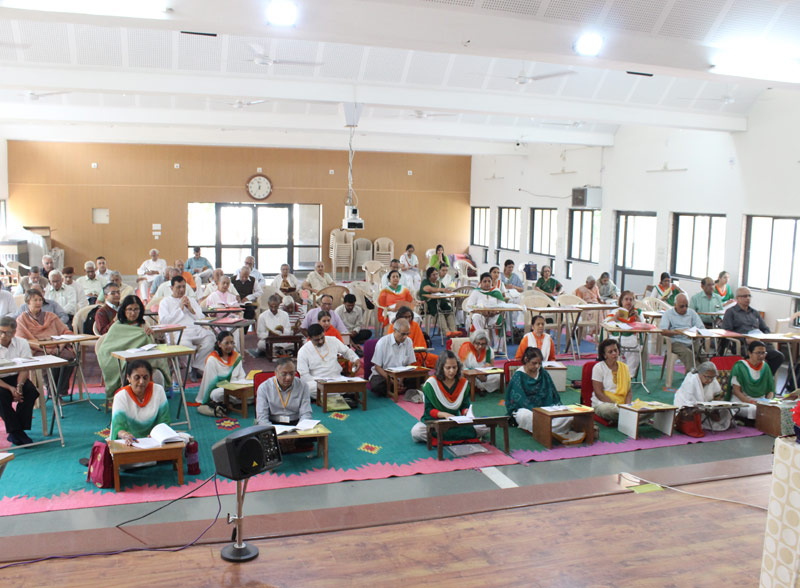 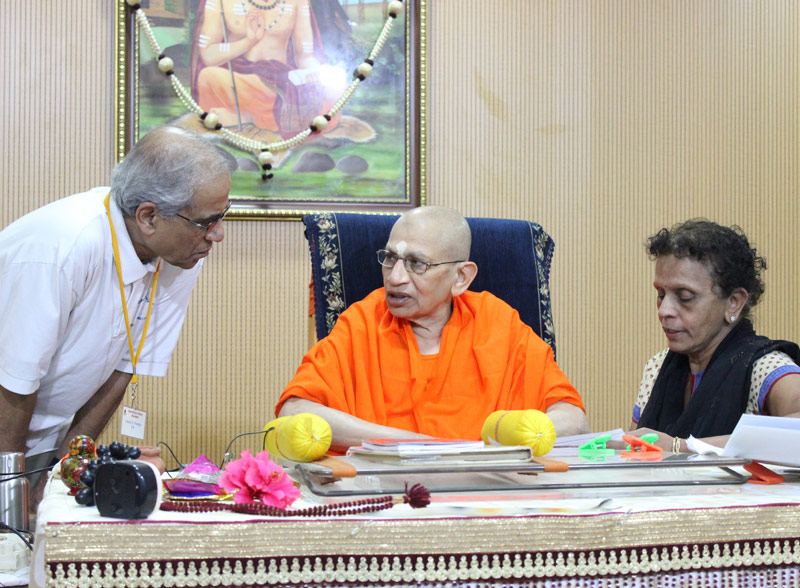 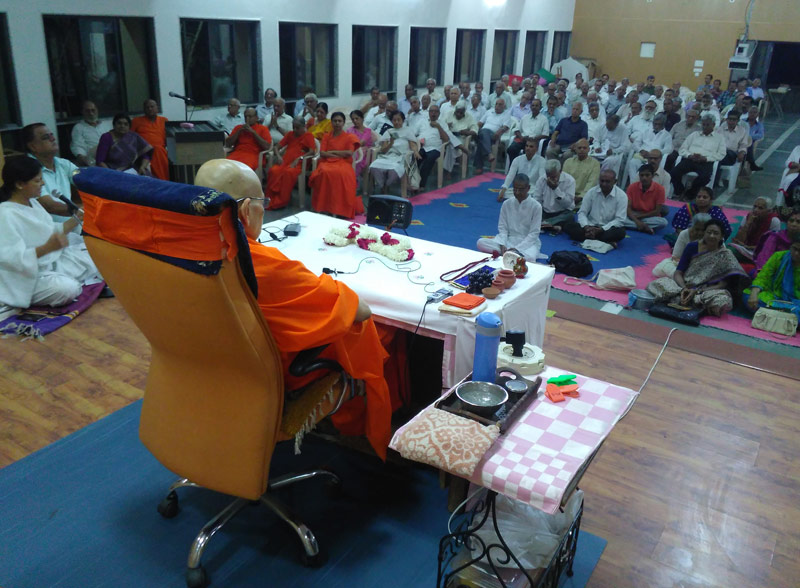 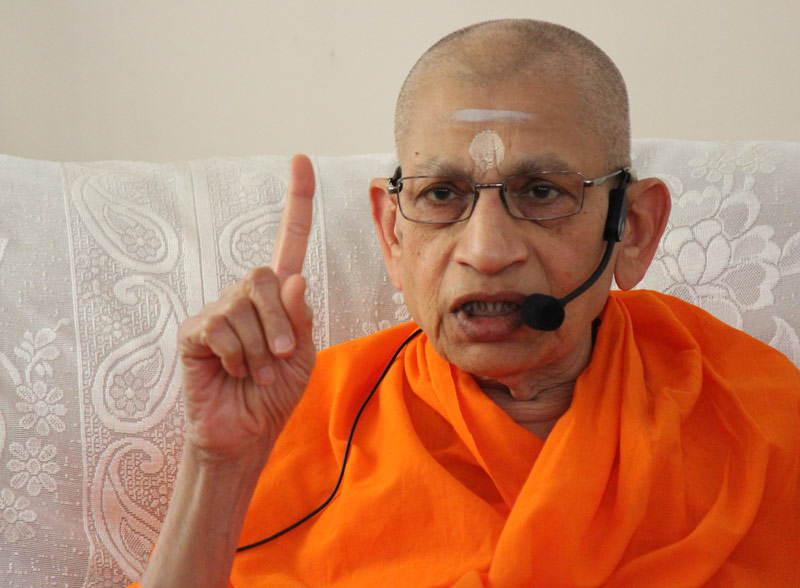 Schedule of the current Vedānta classes :